About a year ago, while looking up directions, I noticed that a prominent new place name had been added to the map in western Queens: 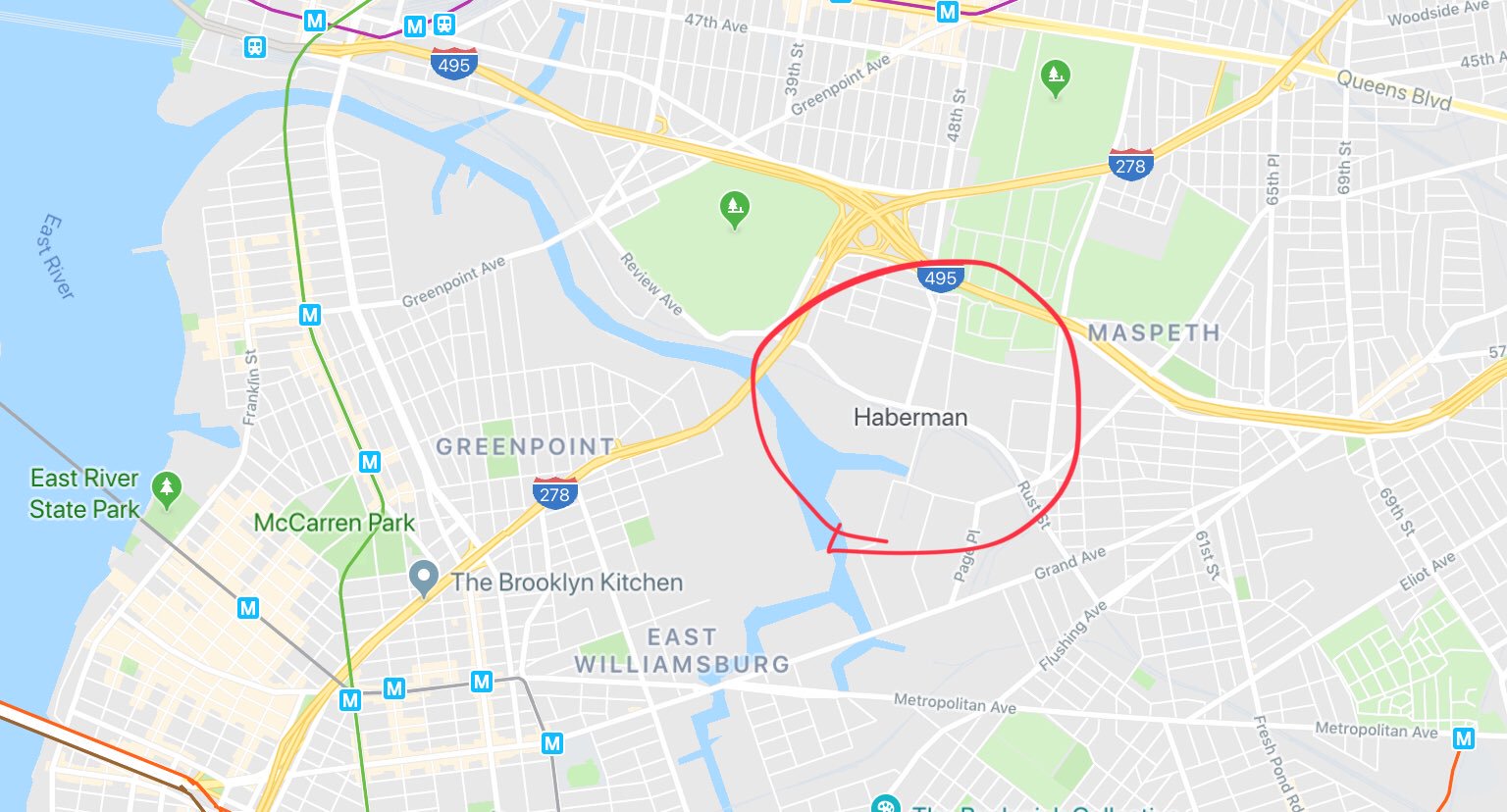 I’d never heard of “Haberman” before. The name of the neighborhood that people who live here would recognize is Maspeth (which you can see up-and-to-the-right of Haberman). Is Haberman even a real neighborhood? Why did Google put this giant Haberman label on the map?

If you Google “haberman”, you will quickly discover that Haberman was the name of a former Long Island Railroad station that stopped running trains in 1998. It was located on the aptly-named Rust Street. The station was originally placed there to service workers at “Haberman’s National Enameling and Stamping Company”, a factory located nearby in the early 20th century.

Towards the end of its life as a station, Haberman “had no stationhouses, sheds and very few signs — the stations were just clearings at the tracks, which were unelectrified”, almost like a vaporware station. The train line and station were shut down in 1998 due to low ridership (at this time, supposedly there were only 2 or 3 daily riders!).

But knowing that the label on the map draws from this rich piece of railroad trivia still doesn’t answer the question of why a big fat label was put on the map in 2019!

At some point, I had to check Haberman out. Is it a real place? Are there Haberman locals, cafes, bars, etc? Its parent neighborhood Maspeth is a mostly industrial neighborhood in Queens, with some small residential pockets at the edges. In general in New York City, you run into very few people who live in Maspeth.

Luckily, an opportunity presented itself: we had bought a rug made in Turkey, and because it was bulky & from abroad, UPS saw fit to deliver it to the UPS regional package waystation rather than our house. This waystation happens to be located deep in the heart of Haberman! FedEx’s package waystation is also located nearby, which makes “cavernous package purgatory” a kind of cottage industry in Haberman. 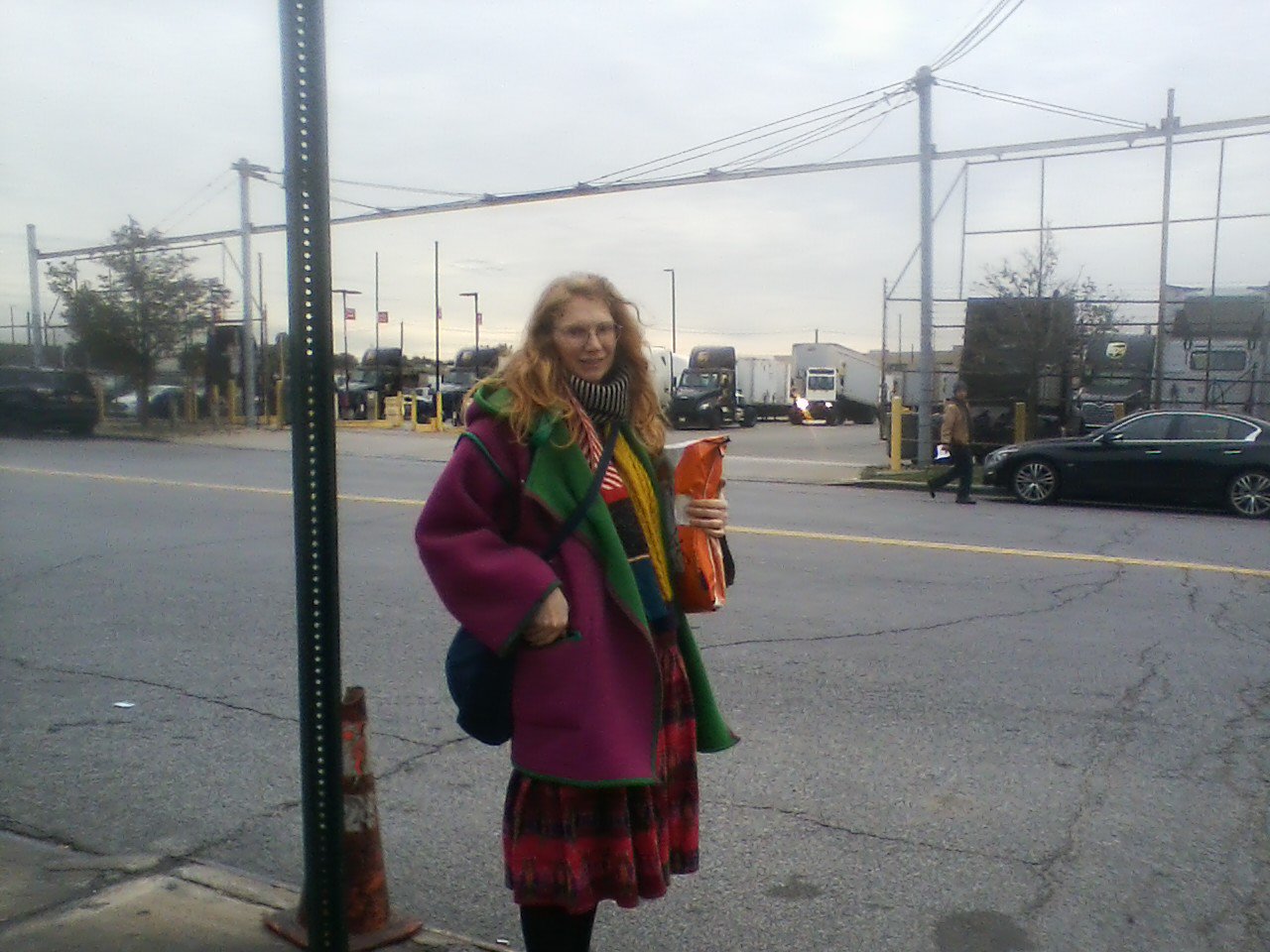 I was hoping to see some sign of overzealous NYC real estate agents trying to make a neighborhood like Haberman “happen”. I had read a little about how Google / Apple / Microsoft / Facebook sometimes purchase neighborhood boundary data from data brokers for liminal neighborhoods like this. In one case, this lead to the erasure of the name of a historically Black neighborhood called “Fruit Belt” in Buffalo; “Medical Campus” was the name that replaced it on Google’s and other maps, ultimately determined by the data broker Pitney Bowes. This is like boring, evil, real life SEO!

But walking around Haberman, it was clear that this didn’t seem to be the case here. The area mostly felt like a rare 100% industrial neighborhood in New York City. There aren’t many sidewalks, and many of them are borderline unwalkable (via double parking from NYPD or DOT workers in nearby fleet repair shops) or unmaintained. Lots of produce warehouses, factories, repair shops.

Names on the land

Returning to Google to try to find answers about why the fake name “Haberman” was placed there, I noticed a trend: a lot of other websites made reference to Haberman. Their unifying charecteristic was that they all looked programatically generated; sort of like how all lyrics websites feel like tiny tweaks to the same template, all of these websites were some variation on fake-local data (“Find local businesses in Haberman!”, “Haberman Bed Bug Exterminators”, etc.). This suggested that they were all using the same piece of data to generate their websites…

One of these sites gave a clue: the “GNIS ID for Haberman” is 972582. GNIS is the Geographic Names Information System, run by the U.S. Geological Survey. It’s a gazetteer, a dictionary of place names. The entry for Haberman notes several interesting pieces of information:

From further reading about the GNIS, I learned that many place names were originally added by government employees manually transcribing the names from paper maps or surveys that the USGS maintains…which made me want to find that map, and understand what “Haberman” looked like on January 23, 1980!

Luckily, the USGS has a wonderful and free viewer for all of the historical maps in their collection called “TopoView” (check it out here). You can filter by date, and I looked at all maps within the area of “Haberman” that predated 1980. The latest map the USGS had from before 1980 is called “Brooklyn 1967” and looks like this — there’s Haberman!!!!!

Something stood out to me immediately: the letter spacing for “Haberman” is subtly different from the label for “Maspeth”.

…with these neighborhood labels, where the letters are more spaced out:

In GNIS, if you look up Maspeth or Sunnyside, they are also classified as a “Populated Place”; this designation makes sense to me, as they remain places where people live and do human activity! But looking at the former train stations, some of these are also classified as populated places — Haberman and Bushwick Junction — while others are classified as a “Locale” — Penny Bridge (a Locale is defined as “Place at which there is or was human activity; it does not include populated places, mines, and dams (battlefield, crossroad, camp, farm, ghost town, landing, railroad siding, ranch, ruins, site, station, windmill)”). There was clearly some inconsistency in how these were classified.

Back in the dark winter hours of January 23, 1980, a government employee was tasked with transcribing place names from the “Brooklyn 1967” map into the Geographic Names Information System. Maybe they get tripped up by the typography…or maybe they’ve never been to New York, and wouldn’t know that this place name that appears to be placed like a neighborhood is just a lowly train station…at any rate, Haberman was entered into the literal public record as a “Populated Place”.

Fast forward to the present day, when corporate overlords like Google and Apple compete for their maps’ accuracy, buying or acquiring mapping data at great cost. A data set like the Geographic Names Information System probably serves as a useful baseline for their maps in the US: it’s hand-curated, and (I assume) generally quite accurate. Probably when their own proprietary neighborhood data appears thin in a given area, they fall back to showing any “Populated Place” names as a best-guess for a likely neighborhood name. But because this is done with no editorial oversight, this analog mistake from 1980 lives on in the devices of literally millions of Google Maps users as a 100% fake neighborhood.

Know anything further about Haberman? Got hot Haberman tips? Are you a Google Maps or USGS employee? Email me!

After this percolated on the internet a bit, Google appears to have quietly erased the Haberman map label: 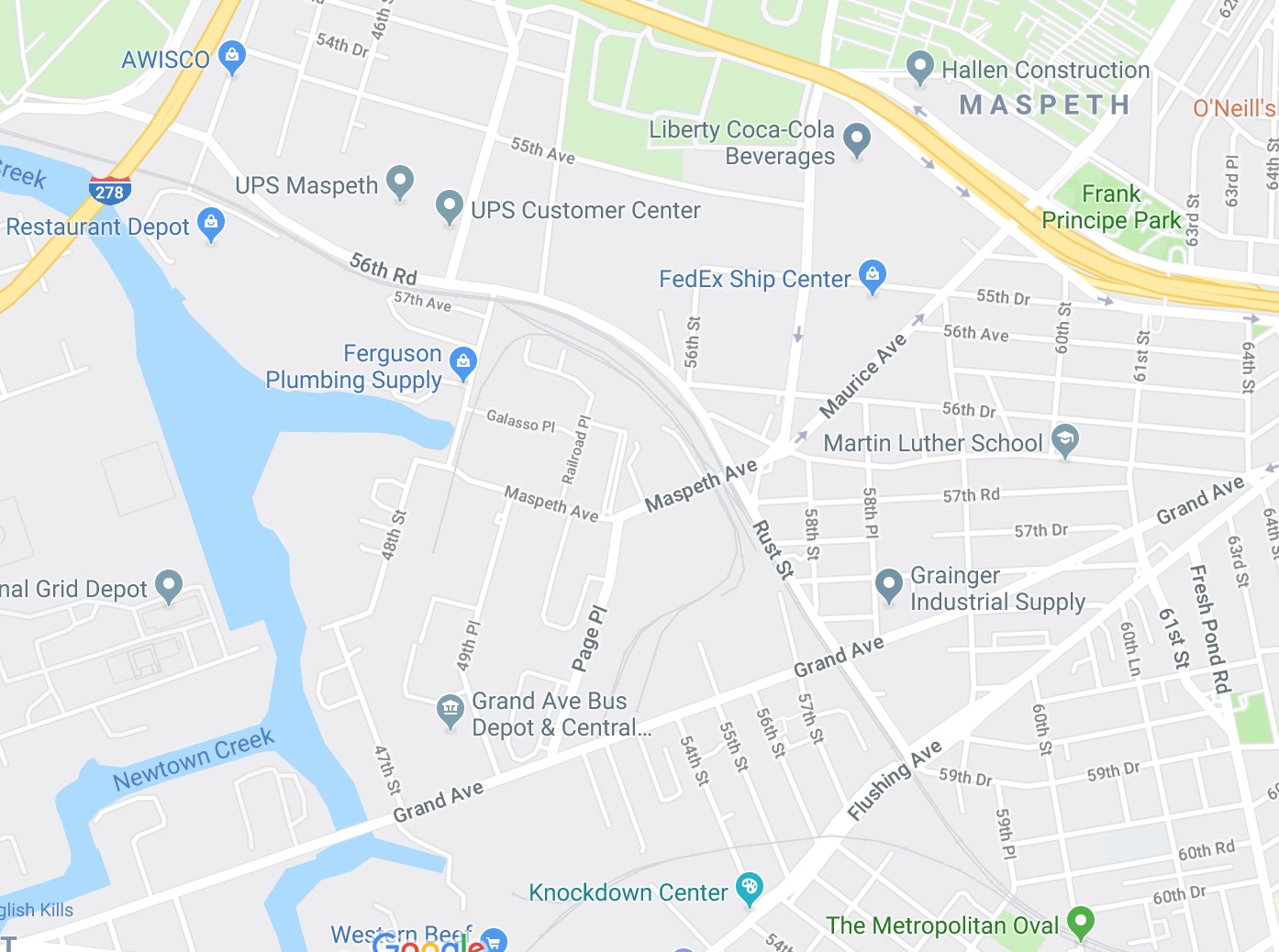 Booooo! Apple and Microsoft still have it, though: